Honor 8X phone review It is undeniable that the Honor 8X has a very distinctive design, beautiful screen, and overall good performance but on the other hand there are some negative points within it. The camera performance is rather poor and the sound is only one speaker and the micro USB port is old. Huawei is able to offer a beautiful design with a very good design and performance at a very reasonable price but at the same time it can not be denied that the device has some other negative points, but compared to the middle class, the device offers something really good.

There is no doubt that the company sign of Honor brand has become one of the important signs, especially in the middle – phone category, it has this year launched a number of new phones, which aims to submit its high value to the user and Honor phone come out 8X for this purpose. The Honor 8X is likely to be similar to many of the other devices currently on the market, even though some of the other details of the device are quite different. Honors have been very popular in this category since Honor 8 Which received great resonance at the time of its release.

The Honor 8X combines the design of the previous series with the design of this year’s Huawei’s flagship P20 Pro. The device has a distinctive glass body and a rear-end design that is similar to the P20 Pro’s in-place camera and stylus style, A distinctive color in which the glass changes, giving the background of the device its own shape.

The front of the device has a screen covering 91 percent of the interface has a notch at the top and the edges of all the edges of the parties in a completely consistent, the phone frame of the metal, which gives a strong feeling when holding the device and comes the same color tone of the glass giving it a homogeneous shape, Somewhat sharp and the size of the device is relatively large and suitable for large hands. At the bottom is a single-speaker port and a Micro-USB port as well as a 3.5mm port. From the top there is nothing. The card port from the left end and the sound and playback controls are all on the right side of the device. In the background of the device.

The Honor 8X has a large 6.5-inch screen of 2340 x 1080 pixels FullHD + provides a pixel density of up to 397 pixels per inch, the LCD screen offers very good lighting even under the sun, plus good color.

However, Huawei offers the ability to limit the size of the text on the screen in different sizes. If you want to make the most of the large screen dimensions, you can control the sizes of texts and elements through the settings and choose what is suitable for you. You can also control the color profile so that you can adjust the screen colors according to your desire. Increase screen saturation the way you like it.

The medium-size Honor 8X is equipped with a HiSilicon Kirin 710 processor, an average processor and a Mali-G51 MP4 processor, which is certainly not the performance of the leading class processors, but the memory is 4 or 6 GB depending on the storage space that comes With 64GB or 128GB options, which are good options for this category.

On the other hand, the device is faulty because it has a USB 2.0 data transfer speed that is actually outdated, especially when the older version of the Honor 8 had a USB Type-C port which is disappointing. The fast charging technology comes with a 5-volt / 2-amp charger type, which is certainly not the same as the kind of fast chargers that come from Huawei’s highest-cost devices. 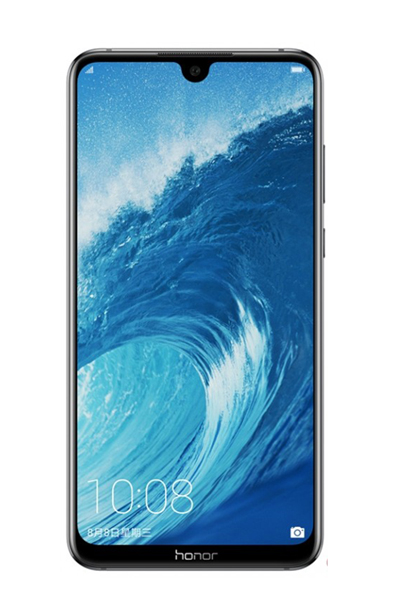 Fingerprint reader performance is very good and does not face any difficulty. The device provides NFC and Bluetooth 4.2 support. The device has a 3.5mm port for the speakers. Unfortunately, the sound works from a special slot at the bottom and the speakerphone is limited to calls. In addition, the device supports the use of two SIM cards and a microSD card port. The Honor 8X comes with two rear-facing cameras similar to the previous series devices. The basic sensor resolution is 20 megapixels with an f / 1.8 lens slot with autofocus feature supported by a 2-megapixel camera for depth processing. The cameras offer 1080p video recording at 60 frames Per second but there is no 4K recording unfortunately

The size of the device is great for some

But at a starting price of $ 265 it is tempting and in the end you can overlook some of the negatives in case you have a limited budget or you do not care mainly about filming and at the same time, you can live with a micro USB port.